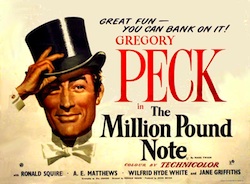 Our next session is on Thursday, 19th of March, 2020. If you haven’t seen this British little gem from 1954, this is your opportunity. If you have seen it, may be it is time to reappraise it.

Based on a story By Mark Twain and directed by Ronald Neame, it features a great British cast, supporting Gregory Peck, who plays the impoverished American with the million pound note.

“HOLLYWOOD AND BEYOND FILMS” are presented at Sydenham Neighbourhood House every 3rd Thursday of the month between 12.15 pm and 3.15pm.